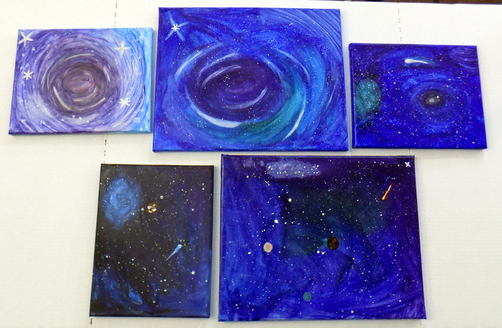 by Amanda Risden of RainbowMaille

This story begins a few years back. . .  I have always been a hands-on learner. So when I decided I wanted to learn to paint I did not do a bunch of research or watch a bunch of instructional videos. I mean I watched Bob Ross as kid but who didn’t right?  😉  I always liked the idea of his “happy little trees” and he made it seem so easy.

But me being oh so Me just had to do things my own way.  I saw a “going out of business” sale sign on an art store in the fall of 2017 and decided I wanted to check it out. I had driven by the store pretty regular it was in a plaza with other shops I use regularly.  I had more than once thought “hey I should check that out someday” but I just kept putting it off.  So the day I saw the closing sign I was a bit sad and actually felt a bit guilty but thought “hey last chance”.  I went in and wandered around a bit, having no idea what I was really looking at or looking for, just wandering wide eyed around the store admiring all the things I didn’t have a clue how to use.

I spotted this really cool portable folding easel case type thing and it was soooo discounted that not buying seemed like a waste.  I mean bargains are hard to pass up and 75% off always looks like a good deal.  So I bought it, then I realized I had no clue how to even unfold it let alone use it. Also I didn’t have any supplies or any real idea how to paint.  I spent weeks staring at the box wondering if I was completely crazy, if I really wanted to go down this road. In those same weeks I also went shopping with 55% off coupons at assorted craft stores and picked up some cheap watercolor paints, a pack of fancy assorted shaped/sized brushes, some canvases, you know the things I thought one would use in painting.

Even after I bought all the assorted supplies I went back to my mental debate of “what was I thinking?” I’m no “artist”.  I decided I wanted to try it just to see how it turned out.  I have no formal training past grade school art class, no special technique or really general clue even, but I decided I was just going to try to have fun with it.

I set up the easel in my living room, no fancy studio, no fancy lights but that living room did have skylights. I loaded my new easel with my supplies, opened the paints and went to town.  Just playing with my paints while watching TV, just for fun like a kid fingerpainting, except I wasn’t really using my fingers.

The very first canvas I painted I was shocked at how well it turned, honestly.  Although, I still thought “I am not an artist”. I made no claim to being an artist but I had now made some rather convincing “art” even if it was purely by accident.  😛  Oh and it was purely by accident, in school art classes I was never good with portrait stuff, faces and features I just sucked.  However, in my quite literal random swirling of the water color paint to make space-scapes I somehow ended up with this awesome pair of lips at the center of this black-hole.  I fell in love with the completed piece and named it “Distant Whispers” it hung in my upstairs hallway until we moved, it now lives in my office over my desk.

I went back to my jewelry making and wire trees and living my life, but every night on the way to bed I would walk past this painting that I had created and it made me think and it made me smile.  I thought it was likely a fluke, a beginner’s luck type thing but as months went by I decided I wanted to try to paint more.  It took me 5 months to talk myself into it but I did start to paint more.  I was learning the limits of my water color paints and I had only done a few canvases but I posted some photos on my facebook and my friends and family were like “wow that’s amazing” “when did you learn to paint?” Which was funny as I admitted that was only like the 4th canvas I had ever put a brush to.  One college friend in particular was very complimentary of the facebook pics so I decided I would just send her the painting as a gift. 😇  After she received it she posted photos of it, hanging in her house, telling everyone how awesome it was in person and how much she loved it.

I then started considering selling them, I mean I already had an online shop so why not give it a try?  I started researching to get a price range and see how the artist-y types wrote their listing descriptions and stuff.  Sadly I learned the price range I had in mind was really rather low compared to many others.  Also while reading their descriptions about how they primed and treated their canvases and such made me realize I don’t do any of that.  Seriously, I had no idea what they were even talking about, I started to panic thinking “Holy crap I’m doing it all wrong” . 😞😟😕

After some more research and lots of reading and investigating the supplies I had already bought.  I discoverd that somehow I had lucked into pre-primed, pre-treated, pre-stretched, kiln dried canvases, just what I didn’t know I needed.  All of that confusing multiple step preparation process they were talking about I don’t have to do it’s all done for me.  All I could think was “Whew, Thank heavens” because I felt like a total schmuck there for a while.  That’s when I decided I’m just going to keep following my instincts right or wrong, for better or for worse.  😉